India will release 5 million barrels of crude oil from its strategic petroleum reserves in a concerted effort to bring down global crude oil prices. This is roughly equivalent to a day’s consumption in the country.


Sector watchers say while the quantity is not big, it is a symbolic gesture that has wider implications for the global energy markets.


“India has agreed to release 5 million barrels of crude oil from its Strategic Petroleum Reserves. This release will happen in parallel and in consultation with other major global energy consumers including the US, People’s Republic of China, Japan and the Republic of Korea,” the oil ministry said in a statement on Monday.


The development is in line with the US’s call to bring down global crude oil prices, which were crossing $85 a barrel last month. The White House said the US would release 50 million barrels of crude oil from the American Strategic Petroleum Reserves.


This coordinated release of crude oil from strategic reserves will be the first of its kind globally.


Brent, the most popular benchmark for trade in international trade in crude oil, touched at $86.40 a barrel on October 26. Prices have now cooled to below $80 a barrel and traded at $78.86 a barrel on Monday.


India strongly believes that the pricing of liquid hydrocarbons should be reasonable, responsible and be determined by market forces. India has repeatedly expressed concern at supply of oil being artificially adjusted below demand levels by oil producing countries, leading to rising prices and negative attendant consequences,” the oil ministry statement added.


An oil ministry official told Business Standard: “This release of crude oil will be in addition to the existing arrangements in place.” The official did not specify the timeline.


HPS Ahuja, chief executive officer (CEO) of Indian Strategic Petroleum Reserves (ISPRL), the government entity authorised to develop and manage these reserves, said in October some cheaply bought crude oil was being traded. Mangalore Refinery and Petrochemicals (MRPL) got this crude oil, which was stored in strategic reserves. The sale of roughly 5 million barrels of crude oil is underway since August and is expected to be completed by January. This is being done to free up space in strategic reserves for more commercial trade. 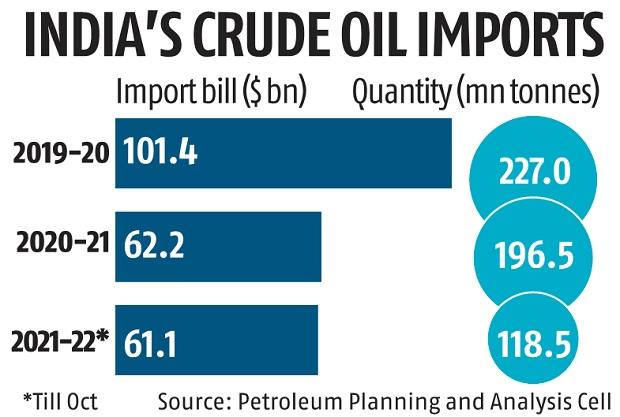 It is expected that MRPL and Hindustan Petroleum Corporation Ltd (HPCL) will receive this fresh batch of crude oil.


India is dependent on imports of crude oil to meet around 85 per cent of the domestic requirements. The country imports roughly 226 MT of crude oil every year.


Facing criticism for rising prices, the government had to bring down the taxes it levies on auto fuels. The finance ministry had lowered excise duty on petrol by Rs 5 a litre and on diesel by Rs 10 a litre on November 3.


Most state governments followed suit by reducing value-added tax. Petrol sold at Rs 103.97 a litre and diesel at Rs 86.67 a litre in Delhi. These prices have remained unchanged since November 4.

What prompted the move