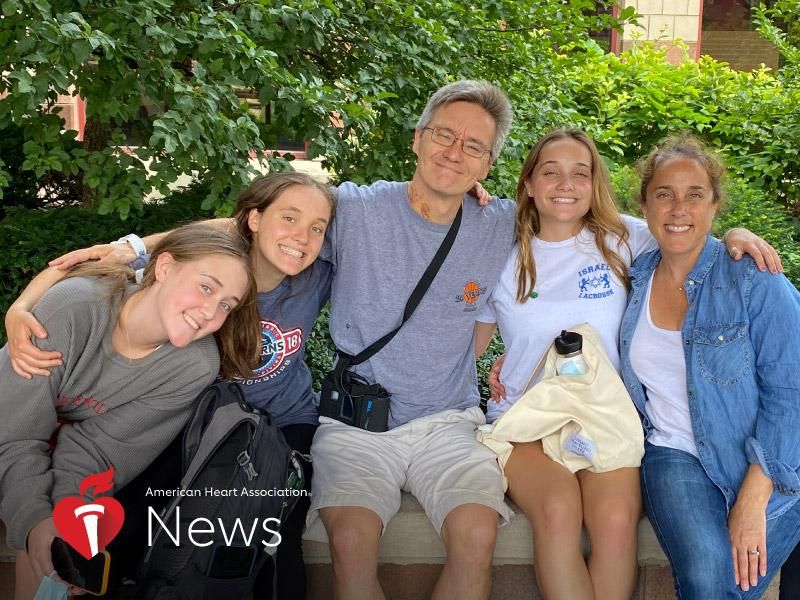 A little after 9 p.m. on a Friday in July, Dr. Kevin Volpp arrived at a restaurant in Cincinnati with his 15-year-old daughter Daphne, her squash coach and some friends. Everyone was tired and eager for a good meal.

Daphne was coming off her second long, intense match of the day, with another the next morning. The tournament was important enough to have lured them away from Philadelphia on the 52nd birthday of Marjorie Volpp, Daphne’s mom and Kevin’s wife.

Kevin needed to fuel up because he was 16 days from competing in an Ironman 70.3 event. He’d never done anything like it. But when one of his older daughters suggested it, doing something so challenging – and doing it with her – felt irresistible. By this night, he was easily in his best shape since his mid-20s.

Next to Kevin sat John White, the squash coach at Drexel University, boyfriend of Daphne’s coach and himself a squash legend. He’d even been nicknamed, “The Legend.” A former world No. 1, his game had been all about power. For years, he held the record for the hardest shot.

White ordered the filet mignon and Maine lobster tail. That sounded good to Kevin, so he ordered it, too.

Chewing his first bite, Kevin reached for his water but knocked it over.

Then he slumped onto the table and tumbled toward White.

What happened next is a story rich in lessons about living and about avoiding death. It’s about the importance of knowing CPR, why being fit always helps and what’s possible when every link in the chain of survival holds firm.

On Monday, Volpp – a leader at the University of Pennsylvania’s Perelman School of Medicine and the Wharton School whose current research includes a variety of efforts to help people lower their risk of heart attacks – will share his story publicly for the first time at the American Heart Association’s Scientific Sessions, the organization’s flagship conference.

Put another way, thousands of people from around the world who are devoted to keeping hearts pumping will hear from one of their own about the day this summer when his heart stopped pumping.

“After the last year and a half, to say we need more wins is truly an understatement,” said Dr. David Harris, the attending physician in the cardiac care unit where Kevin was treated. “Kevin is an absolute win. He’s a patient I will always remember.”

Before that fateful dinner, Daphne played two matches. Her second ran so long that their group was late for a dinner reservation.

Her coach, Gina Stoker, and White arrived last. Daphne had been seated next to her father, but gave her seat to White.

Because of that, when Volpp collapsed and rolled left, White caught him.

Placing Volpp back into his chair, White thought his body felt stiff.

When paramedics arrived, they connected Volpp to an AED, a portable electronic device that analyzes the heart rhythm and, if needed, can deliver a shock to try restoring a normal rhythm. The machine advised that a shock was needed. They deployed it, then gave more chest compressions.

After another shock, Volpp’s pulse became strong enough to take him to the ambulance. Before driving away, his pulse disappeared again, requiring a third shock.

En route, paramedics called the hospital with details. A team was waiting in the cardiac catheterization lab. Doctors found one of his arteries 99% blocked. They performed a minimally invasive procedure that involved inflating a balloon to open the narrowed pathway and inserting a stent to keep it open.

With his body on the mend, the unknown was his brain.

He’d gone without a pulse, thus starving his body of oxygen, for about 14 minutes. Permanent brain damage can begin within minutes.

Once he regained consciousness, Volpp was confused, as is typical.

With each successful step, his odds improved.

Still, survival rates for cardiac arrest outside of a hospital nationally are around 10%.

Harris, the on-site cardiologist, told Volpp the key to his survival was immediately receiving high-quality CPR.

“How do you know I received high-quality CPR?” Volpp asked.

“Because I’m talking to you 25 hours after the event,” Harris said.

At 7:40 a.m. on Sunday, Volpp tapped out the following text to White: “Hey John, I don’t know how to thank you. I think you saved my life. I think I’m doing OK now thanks to you”

For a few weeks after his life was saved, Volpp’s chest and ribs were sore.

“But it was sort of a pleasant reminder of how people helped me survive,” he said. “So I didn’t really mind.”

He traded Ironman training for cardiac rehabilitation. A stress test showed no problems stemming from the repaired artery or elsewhere in his heart.

He’s been cleared to exercise daily. He’s even rejoined his triathlon training club.

“I’m choosing to believe the narrative that all these things perfectly fell into place to save my life for a reason,” he said. “There’s a lot for me to yet do in this world.”

Such as helping fewer people die of heart disease.

Volpp is one of two leaders of a five-year grant from the National Institutes of Health to study how behavioral economic approaches (think, “nudges”) can increase physical activity among patients at higher risk of heart disease. He is also leading a multi-project initiative at Penn Medicine on reducing heart attack risk by influencing patient and clinician behavior and has published more than 150 articles on related topics.

“It’s always been one of my most important efforts,” he said, “but now I’m doubling down on it.”